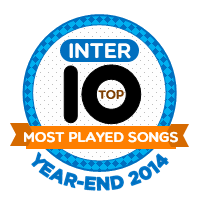 INTER TOP 10 MOST PLAYED SONGS YEAR-END 2014
HOW IT WORKS: All #1 International songs of 2014 were included and ranked according to the longest stay at the No. 1 spot. In case of a tie, the basis will be the number of weeks of the song on the chart. If there is another tie, the song which came first on the chart will be ranked first.

8. DANGEROUS -Before You Exit

Again, congratulations to all who made it at the Inter Top 10 Year-End 2014! Thank you for making 2014 a very good year in the music scene!﻿
COMMENTS
For more updates, stay conneted on our Facebook, Twitter and Website!